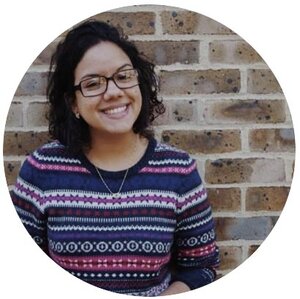 Isadora Cal has an MA in Publishing at Oxford Brookes University and is currently finishing an MBA in Business Intelligence and Analytics at FIAP (São Paulo, Brazil). She has been working in the publishing industry for 10 years now, with experience in proofreading, copy editing, digital marketing, digital publishing, and more recently in data analysis. She started the Accessibility Project at Bookwire after attending her first ebookcraft in 2018.

Isadora Cal will join us at Tech Forum 2020 on March 23 for a session called Making Brazilian literature accessible and on March 24 for Case study: Brazilian audiobooks.

In my opinion, the world is a better place with access to the internet. There are certainly some downsides to it (fake news spreading faster than some epidemics, for instance), but mostly there are upsides. Like the fact that I can ask a question on Twitter using the #a11Y hashtag and get answers from all around the world within minutes, or how I can access sites like Reddit or Github and find very specific information that no one around me has.

If you speak English, you can be part of almost everything online. If you’re Brazilian, you can have a Chinese friend because chances are both of you can communicate in English. All this makes us feel connected, as if we’re one. But we’re not — and that’s not a bad thing.

Let me explain — and bear with me while I introduce the subject. In 2019 I had the privilege of attending ebookcraft and Tech Forum for the first time. It was a privilege not only because the event itself is great, but because going from Brazil to Canada is expensive no matter the circumstance. It was my first time attending an event outside of Brazil. Indeed, it was my first big tech event. Before the event, I thought I knew where to look for answers. Sometimes I’d read some piece written by someone from the industry and would Google them, find their email, LinkedIn, or Twitter, then get in touch to ask something — only to be ignored most times. I subscribed to newsletters from Publishers Weekly, The Bookseller, The New Publishing Standard, and so on. I followed people on social media. I thought I was connected and that the reason I wasn’t often successful when reaching out to people or some companies was because I was too young and no one knew who I was. Turns out I was wrong. Some exchanges just work better in person, like attending professional events and meeting people there. Suddenly, at ebookcraft and Tech Forum, I was talking to a lot of people who knew a lot of stuff, and I felt so deeply lucky. I even talked to Ashleigh Gardner (from Wattpad) whose work I had been following and admiring for some time and would never have expected to meet in person. Lots of business cards were exchanged and new friends were added on LinkedIn and Twitter, but the main thing for me was how much I learned: how other professionals tackle the issues that I have; how emerging technologies are trying to improve the industry; and what’s new out there.

I loved Canada, and loved even more how Canadians are pleasant and welcoming. Every time someone at the event found out I was from Brazil, they were very surprised. Lovely, welcoming, but very, very surprised. Why had I come from so far? Was it worth it? I hadn’t realized until after answering the same thing for the fourth or fifth time that, for the majority of the attendees, they thought of the conference maybe as a Canadian event. Not in a sense that it’s only for Canadians, but as in an event that focuses on the Canadian market. But for me it was an international event. I met people from different cultures, cultures that have different market behaviour. Most of the presentations I saw were absolutely international. We’re talking about digital publishing: metadata, ONIX, BISAC, EPUB3, coding — all international stuff. I could bring all the cases from the Canadian publishing industry to Brazil to share with colleagues and everyone else I could talk to. I spent months talking about ebookcraft. I made a post for Bookwire’s blog in hopes of convincing other publishers to attend the 2020 conference.

And then I saw there was a call for proposals. I didn’t think we stood a chance (me and Joana, a colleague who went with me in 2019), but we thought that maybe people would like to experience the same thing we did. Maybe they would like to hear how things are done in a different culture; maybe they would want to know the state of the art in countries that don’t speak English. Maybe it would be good to show that we are not one, we are actually very different, but the magic is that we can still connect and through our shared experiences, we can learn so much from each other.

Joana and I were the only attendees from Latin America last year, if I’m not mistaken, but I hope every year from now on more people from other countries come, and that more people get to present. I have no idea what the digital publishing market is like in Africa, and that’s an entire continent! What’s it like for countries that have different alphabets? Do all devices work? Why can’t I find much online about digital publishing in Portugal even though we speak the same language? How do artists and publishers profit from webtoons in Japan? Is Japan making accessible mangas?

For me, this is also accessibility: having access to knowledge, but especially to diverse knowledge. Learning from different perspectives, exchanging experiences, seeing the world through the other’s lenses. You realize that even though your idea of winter is 20°C and the other person is facing -40°C, you both had the same problems trying to find a solution for a Bible’s navigation. Or that while some deal with Trudeau and others with Bolsonaro, they have equal loads of EPUB2 that have to be made into EPUB3.

I’m honoured for the opportunity to speak at Tech Forum this year, and I hope it will inspire more people outside of North America to submit their proposals. I heard from some CEO (can’t say who) that ebookcraft and Tech Forum was the best event if you work with digital. That’s how I ended up going last year and I wasn’t disappointed.

Isadora Cal will be talking more about accessibility and audiobooks at Tech Forum on March 23 and 24, 2020 in Toronto. You can find more details about the conference here, or sign up for the mailing list to get all of the conference updates.